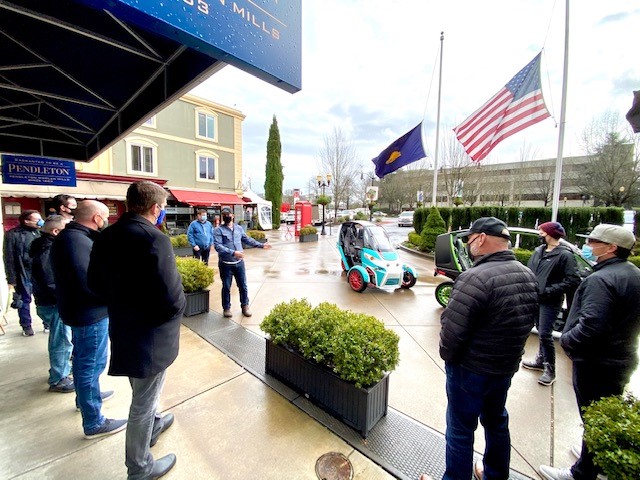 Eugene, Ore. (March 8, 2021) –Eugene area passengers will soon have one more great reason to Fly Local, with the addition of Southwest Airlines and several new nonstop flight options. Southwest Airlines has announced that they will begin service at the Eugene Airport in the second half of 2021.

The timing is good for increased flight options at EUG. Eugene will host the U.S. Olympic Team Trials for Track & Field this Summer and the World Athletics Championships in 2022. The event will bring this world competition for track and field to Eugene and to the United States, for the very first time.

Southwest Airlines was recruited to the community by a coordinated local effort that secured support from private and public organizations across the region.

“We often say that economic and community development are team sports. This recruitment project was truly a team effort,” said Brittany Quick Warner, President & CEO of the Eugene Area Chamber of Commerce. “With over 50 private businesses and public partners submitting letters and pledges to fly local and fly Southwest, we were able to show broad community support to welcome Southwest Airlines and for growing our local economy.”

“It felt natural to rally around this timely economic development opportunity for our region,” said Vonnie Mikkelsen, CEO of the Springfield Area Chamber of Commerce. “The fast-moving, creative, and collaborative effort between local economic development partners was quite extraordinary given the challenges of the pandemic. The reward is celebrating the win with so many community supporters.”

Following the vaccine roll out, more visitors to our region will likely translate to an accelerated economic recovery–bringing increased business to the hospitality industry, which includes hotels, restaurants, entertainment/recreation, and retail sectors.

“Adding more air services is a very strategic way to spur economic activity targeting local industries that have been most adversely affected by the pandemic,” said Matt Sayre, Managing Director at Onward Eugene. “Studies show that increased air services translates to income growth primarily in the service and retail sectors.”

In addition to the economic benefits, there are carbon emission considerations. In 2019 there were 876,024 road-travel trips from the EUG airport catchment area to the Portland airport, that could instead have been made from our local airport. Analysis has shown that each road trip that is shifted to be a flight via EUG can reduce net CO2 emissions by 21.3 Kg.

“I am so pleased to welcome Southwest Airlines to our community,” said Eugene Mayor Lucy Vinis. “We know when Southwest enters a market, fares go down significantly, and along with more nonstop flight options for the Eugene region, this will also reduce vehicle trips on Interstate 5 as more passengers fly local.”